Only CRYO can take the parts necessary for supplying power to a motor, assemble them into a unit, and deliver it as a single order,
reducing our customers' workload.

We are the only manufacturer that delivers not only Terminal Headers but also cryogenic cables, Junction boxes and other accessories as units, reducing the time you spend on design and procurement. 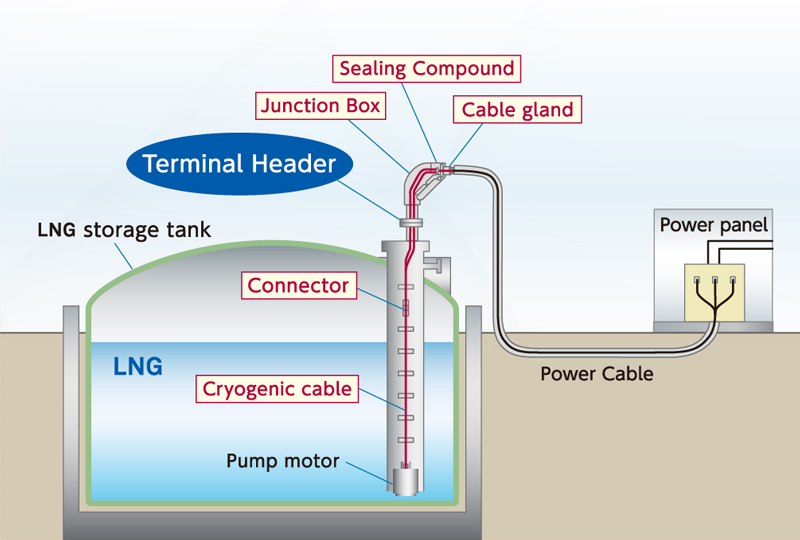 We can deliver everything in the diagram, from cable glands to cryogenic cables, as a single order.

Ever since we first developed our Terminal Headers 30 years ago in 1987, we have provided a sense of security and reliability to our customers.
Not only we have developed products compatible with a wide range of pumps, but also expanded maintenance services and investigated the degradation of products in use that are approaching their end-of-life in order to verify safety.
CRYO Engineering Co., Ltd. will continue to provide these trusted products, used by so many of our customers, to help supply energy around the world.

We offer various types of Terminal Headers, depending on your needs.

We can recommend the most suitable Terminal Header for your specific application.

Terminal Header Performance Categories(smallest flange sizes are down below)

A safe product even in the event of a gas leak In 1987, Furukawa Electric Co., Ltd. and Tokyo Gas Co., Ltd. joined forces to develop a Terminal Header that would prevent any leakage whatsoever. The result was the world's first Double-seal Terminal Header. Based on the concept of a failsafe in the form of another seal in the case of single seal leaks, it employs a double seal . It is a trusted, proven standard product.

Because the pressure on Terminal Headers on LNG/LPG carriers is low, regular Terminal Headers can be overbuilt.
This product was developed for low- pressure pump applications without compromising the double seal functionality.
It is currently used in 90% of new LNG carriers and 100% of new Japanese LPG carriers. CRYO Engineering Co., Ltd . use certified materials and provides installation.

For pumps with low voltage and low discharge pressure, we have small Terminal Headers that preserve the high performance of our Double-seal. They are suitable for small - scale equipment such as satellites.

Designed for the LNG - fueled ships of the future, this Terminal Header is for small, low-pressure pumps such as those on gas-fueled ships. With a track record of installation on numerous LNG ships, CRYO's unique responsiveness to customers delivers a sense of security and reliability.

This product was developed in response to calls for the ability to detect when a gas leak occurs. We added a nitrogen gas-filled space inside the flange that enables detection of irregularities in either seal while retaining the double seal functionality. More compact than the Dual type Terminal Header, it saves space on the tank stage, greatly helping pipe configuration design.

This product is particularly popular with overseas customers. It consists of two single-seal Terminal Headers with a short pipe containing nitrogen gas. In the event of a leak, the change in the nitrogen gas pressure of the short pipe makes it possible to detect whether the irregularity is in the first or second Terminal Header.

The CRYO Group is a company contracted by Furukawa Electric Industrial Cable (FEIC). FEIC manufactures high-quality cables that remain flexible even in the extremely low temperatures of LNG due to a combination of a flexible stranded conductor, multilayer-wound polyester tape and scratch-resistant SUS braiding.
As a top Japanese manufacturer with over 100 years of tradition and technological development, we support submerged pumps around the world. CRYO Engineering is wholly unique in that it purchases cables from FEIC, adds terminal processing and offers delivery as a set with the Terminal Headers.

Available For LNG/LPG land-based terminals, and carriers
Applicable sizes: 16-150 mm², up to 6600V

The harsh operational environment of ships and land-based facilities, including temperatures as low as -162°C, require insulating parts developed to be sufficiently durable and terminals and other accessories developed in consideration of site construction requirements.
With on-site installation included, we reduce the burden on our customers.